[Kowloon Metal City: Fun Fact] That's Why Both The Simpsons and Judas Priest Prevail for Decades and Still Going Strong 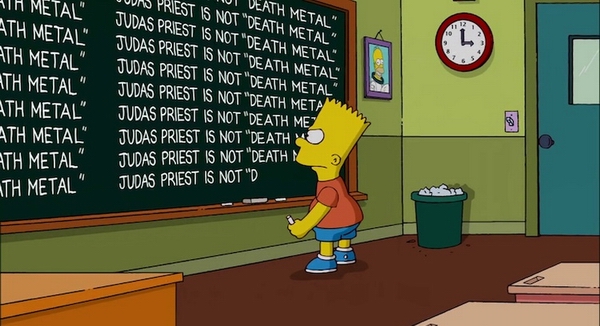 Honoured as one of the best TV shows ever, it is common to found cameos by celebrities in the American cartoon The Simpsons. Recently Judas Priest, the world-famous British heavy metal godfathers, made their appearance in the show. Definitely exciting, except the script described them as "death metal" instead of the more simple and accurate "(traditional) heavy metal". Obviously the creative teams heard the words and curses from the community. In the next episode, they gave the statement "Judas Priest is not 'death metal'" in equally famous chalkboard writing scene in the show intro as a joke as well as apology to all Priest/metal fans. Not difficult to understand why the show still applauded after a few decades, just as Judas Priest themselves.
於 1/14/2014 09:11:00 下午